Ask 11 teachers, 7 automated comparison algo's: given a reference solution R, which of 2 other student solutions C1 and C2 is most similar?

Many papers use one or more software metrics as attributes for computing similarity between blocks of code, so it's good to be familiar with them.

The author looks at five software metrics as a way of determining similarity of two AST subtrees: “S-complexity” (number of function calls); “D-complexity” (number of global variables defined or updated within the block, divided by number of function calls); Cyclomatic complexity; Albrecht complexity (a combination of globals, files opened, function parameters, and other stuff, seems to be related to function points which were invented by Albrecht at IBM as a way of classifying the complexity of each function); Kafura complexity (from Wikipedia: Henry and Kafura's (1981) complexity value is defined as “the procedure length multiplied by the square of fan-in multiplied by fan-out” (Length ×(fan-in × fan-out)²)).

The author obtains different results of precision and recall by using different subsets of these metrics; the basic message to me is that we should look seriously at the metrics reported by the various Ruby tools.

This work focuses more on analyzing a large piece of software and using clustering to find the files/documents/modules that are closely related.

Uses Latent Semantic Indexing, which is used to cluster text documents by concept, as a way to get at the underlying semantics of source code. The insight is that while LSI is sometimes criticized in the Info Retrieval world because it does not consider word order or morphology (endings and other mutations to words), this is fine for source code because naming is often suggestive of semantic concepts, ie, developers choose names for variables, functions, modules, etc that are likely to be meaningful to other developers.

They ran the technique on the source code for the old NCSA Mosaic web browser, and found two separate implementations of the same abstract datatype (linked list) and various other clusters that could be labeled by humans with labels such as “drawing area”, “growable string buffer”, etc.

Other work that cites this or is cited by it:

Cites the classic algorithm of Al Aho, 1986, in their Aho/Sethi/Ullman compiler book (the “dragon book”), for detecting common subexpressions during compilation. The basic idea is to hash subtrees of the AST into a fixed number of buckets B, and then within each bucket compare every subtree to every other subtree (which takes O(n^3)). Their hash function ignores names of identifiers and also tests changing the order of arguments in commutative operations like '+', to avoid being fooled by simple “copy, paste, make a small change” scenarios.

Rather than detecting only “clones” in this way, they also check whether “sequences” - left-leaning or right-leaning trees representing a sequence of subtrees, such as the body of a function - contain common subsequences: 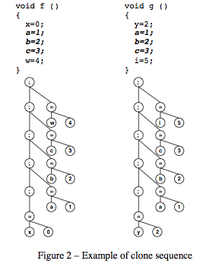 They also have a heuristic for checking other “almost-clones”, by checking whether the parents of already-detected clones or near-clones are themselves near-clones. (Though it seems like using Edit Distance on ASTs, as Huang et al did, would be much cleaner than what they do here.)

This work constructs this graph, then looks for “similar paths” v0..vN in two different subgraphs. Essentially, it looks like they're using the approach of Baxter et al. but annotating each subgraph with how many data-dependence edges it has, as another measure of similarity. They bound the maximum length of “similar” paths because their approach relies on identifying a pair of starting vertices (they don't say how) and then “growing” the path to include its neighbors.

This work describes a novel measure of similarity. Perhaps more interestingly, it goes through a lot of the history of other measures (like tree distance), and criticizes them. It also describes a technique for mapping variable names between different programs. Essentially, it just recommends trying all the different mappings and figuring out which ones will cause the similarity metric to be the closest, and to use that one.

Some ideas to try

* Create feature vector that includes output of 'flog' or other complexity metric reporters, number of each type of 'reek' message, etc * Trying clustering on ASTs of various depths, ie, pruning the AST at some fixed depth in order to compare 'gross structure' * identify the “best” solution or solutions using a simple heuristic, like minimum flog score or lowest number of lines of code, and then have some of the features in the feature vector be pairwise comparisons between a given submission and that “reference” submission. For examples of other “pairwise” features, see the summary of Gaudencio et al. above.

Two of my students who helped with CS169 TA duties very early on investigated some of these tools (all of them are supplied as gems), and here is what they found: